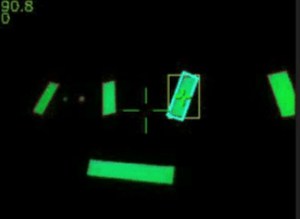 Carpentry has made progress on making the field for our Regal Eagle Rampage on March 6th, 2022. Our carpentry team has just about finished cutting all the pieces of wood to complete the Hub, and now we are in the progress of assembling the field. We have made progress on our intake prototype and now it takes in the cargo efficiently. After seeing kickoff this year, our team decided that a vision system was going to be a necessity. We bought a Limelight back in 2020 but didn’t have time to actually use it. The Limelight contains a camera with some very bright LEDs on it, which make retro reflective targets shine very brightly.

The Limelight also has built-in software that filters out what parts of the image are from retro reflectors and what parts are unrelated. Then there are a bunch of options to narrow it down to just the targets you want, such as aspect ratio and area. But this year there are many targets in a circle, so the shape you get isn’t going to be dependent on the position of the Limelight, both in distance and height. Instead of selecting the target that is biggest or closest to the center of the screen, we ran two pipelines that detected the leftmost and rightmost targets, and the distance between them. We reasoned that if we knew how far away the two edges of the vision targets are we could compute the distance to the hub. However, turning that knowledge into an equation proved to be harder than predicted. We deduced that the graph comparing size on the camera to distance would be an inverse relationship since when the camera is closer to the vision targets, they will be more pixels away from each other (the image is wider on the screen). We just took a bunch of measurements and plotted a graph to fit.

As predicted, the graph was in the form we expected. The x axis is the distance between left and right (pixels), and the y axis is the distance to the target (cm). Just look at that regression! The R2 is 0.999. If it were any higher, we’d have to assume this data was fabricated instead of collected by taking honest measurements. We didn’t figure out how to do it the proper way (with math) so if anyone wants to figure out why 9471/x is the correct formula, the distance between the center of the leftmost and rightmost is about 137 cm. If not, trial and error has been shown to work really well so we might just use that once we have a replica hub built.

We tested how high up and how far back the shooting/intaking mechanism should be mounted. We started off by doing some trial and error, then we modified certain lengths until we decided on a reasonable height and distance that allows the mechanism to intake while completely inside the frame mechanism. This is still just an idea …we need to check to make sure that the intake angle works, then we will verify our calculations in cad. Mechanical team has been making the mounts for the falcon prototype shooters. The programming team has made progress on our robots autonomous mode.

The programming team has worked on UltraSonic, which measures how far away you are from the object so it can stop at an exact point. They have also worked on PID, which determines how fast the robot needs to move to get to a specific spot. These programs help the robot start and stop at certain points, calculate the distance between the robot and the object, and determine the speed at which the robot needs to move at to get to the desired spot. They also have done some Artificial Intelligence.

The mechanical team has been working on a possible intake for the robot. The plan is to mount brackets for the rollers of the intake which will help the robot pick up the ball. We had planned to use carpet originally but changed our idea to rollers with rubber on them which helps with traction with the ball. A CAD design has been made for possibly having our intake double as a Falcon-powered shooter. A lot of metal has been cut the last couple of days for the shooter so it is an ongoing process. The electrical team has been designing the layout of the electrical components on the Lexan panel for the robot. Carpentry still is hard at work at making the proper parts for Regal Rampage, our practice competition before the real deal.